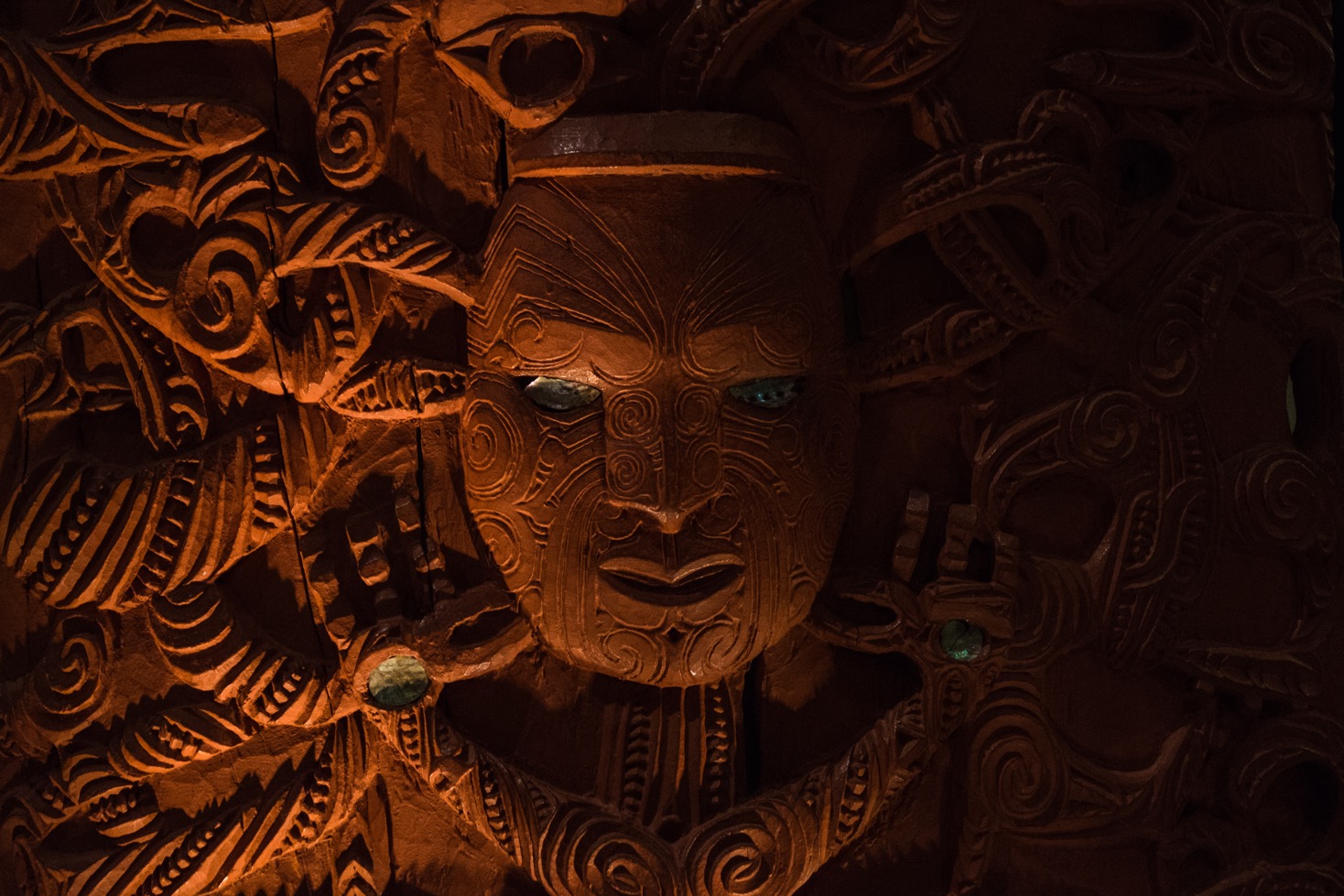 If I ask you “What do you know about New Zealand?” you will surely answer me : “The All Blacks and the sheeps”. But New Zealand is also the maori land. This people discovered “Aotearoa”, as they call it, at the end of the 10th century whereas the Europeans only arrived during the 17th century. Let’s go discover this beautiful culture!

Franck and I were curious and eager to discover this culture when we arrived in New Zealand. We were lucky because it was the Matariki Festival at this time. This festival which last a month celebrates the maori new year. Many meetings and exhibitions are organised all around the country. So here we are at the “Manu Aute Kite Day” in Auckland suburbs two days after we arrived. For the first time we enter in a marae, a communal and sacred place for maori people to see schoolchildren doing some Kapa Haka. Of course it is less impressive than the All Blacks but still it is really cool. This afternoon we also have the opportunity to learn how to built kites using plants leaves and maori weaving method. It is not very complicate but you need to be patient. 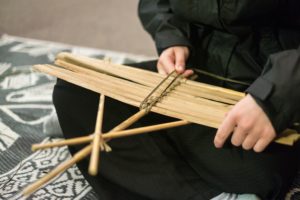 This is not a boat mast!

Before leaving we couldn’t resist to eat our first hangi, the traditional maori meal. In reality hangi is more a way to cook than a meal. Meals are cooked in a hole in the ground surrounded by hot rocks and steam. On the menu today : chicken, potatoes and kumara. The steam gave a smoked taste to the food. I really like it.

A week after, still during the festival but in Whangarei, we experienced one of the most authentic moments that we had with the maori community. We spent an evening around a wood fire just listening some maori telling stories. One of them is a young artist who wants to use photography to highlight different maori women lives. An old man wanted to explain why his admiration and respect for his culture brought him to start a thesis at his age to speak about this subject. Every speech was thanked with a traditional maori song at the end of it. 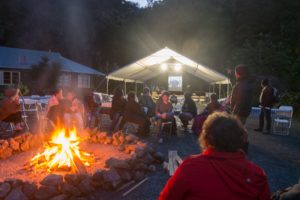 A long time ago this fire would have been used to cook humans!

Back in Auckland a week later, we went to a Kapa Haka tournament, one of the festival highlights. The winner team will be the one will present the most original and successful Kapa Haka. Well, we were not disappointed! That was so cool and very impressive! Here an extract of the winner performance :

About 60 people lives in this village located in Rotorua in the middle of a very active geothermal zone. As there is a lot of sulphur steam it smells like rotten eggs! During an hour an inhabitant of this village is our guide and explain to us the specificities of living here. For instance, meals are cooked using the traditional maori hangi method. Inhabitants put their food in a hole in the ground during the morning and come back for dinner to take the food which has been cooked by the steam.  There is no need to dig a hole. Craters appear naturally when the ground collapses due to geothermal activity. 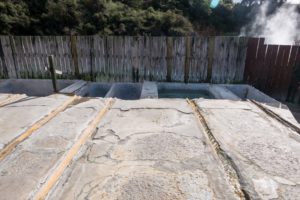 No need to prepare a hot bath, it is already ready!

There is also an anecdote about the dead people. Before bodies were dropped off in mud pools. They were attracted to the pools bottom as in quicksand. Since maori people converted to Christianisme dead people have to be buried but geothermal activity causes problems as the steam coming from the ground makes the bodies come to the surface. So now coffins are sealed in concrete chests and pipes were installed to release the steam. 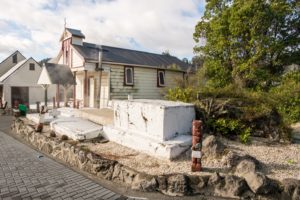 You can see one evacuation steam tube on the left.

Our guide explain to us that maori langage is mostly spoken but unwritten. This is why maori carvings as so important to them : they use them to tell their ancestors stories and their legends. On carvings we can see characters sticking their tongues out. If the character sticks the tong on a side it means “Welcome” whereas if it sticks it in front of him it means that he wants the person to introduce itself and say why he came.

After some others stories the visit already ends but before leaving the village we attend a good show with maori songs, dances and a Kapa Haka. We even were invite to take a picture with the artists! 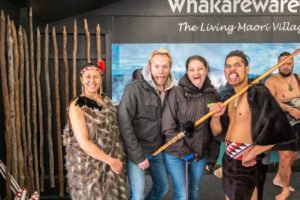 The village is not specially fitted out for wheelchair but as there are no stairs nor important slopes it is possible for a wheelchair user to visit it. However the ground in uneven at some places.

During our stay near Rotorua we chose to visit the Tamaki village. It is not a real maori village, no maori lives here. It is a touristic attraction but a good one. We appreciated this evening during which began with a welcoming ceremony including a war dance.

After this ceremony we entered in the village. We strolled in it and have been trough several stands to discover different sides of the maori life : physical education, war arts, carving, weaving. Franck also learnt how to do the Kapa Haka. 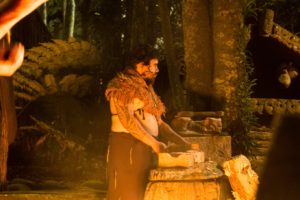 Next the tribe leader came to explain to us how the hangi dinner was cooked. But before the dinner we assistad to a show during which one we saw a Kapa Haka and listened to many maori songs including the traditional love song “Pokarekare Ana”. All these are so lovely!

The hangi was yummy! Fishes, shellfishes, chicken, lamb : we tried everything! I really liked the vegetables and the stuffing which had this smoked flavour that I love! For desert, the smoked pudding and the pavlova were also really tasty. We had a lovely evening which ends in a perfect way with a lot of laughs and in joyous and relaxed atmosphere thanks to all our bus driver jokes (bus return is included in the fees). Denis, the driver, also taught us some maori songs that children learn at school.

The village is fully wheelchair accessible but if you can’t walk you will have to reach it using your own car or a taxi as buses are not accessible.

Finally if you have the time and you want to know more about this culture you might want to visit the Auckland War Memorial Museum in Auckland and Te Papa Museum in Wellington. These two museums are very well made and are wfully wheelchair accessible. You will see a lot of maori carvings, daily items and some information about the Waitangi treaty, the New Zealand founding act as a British colony.