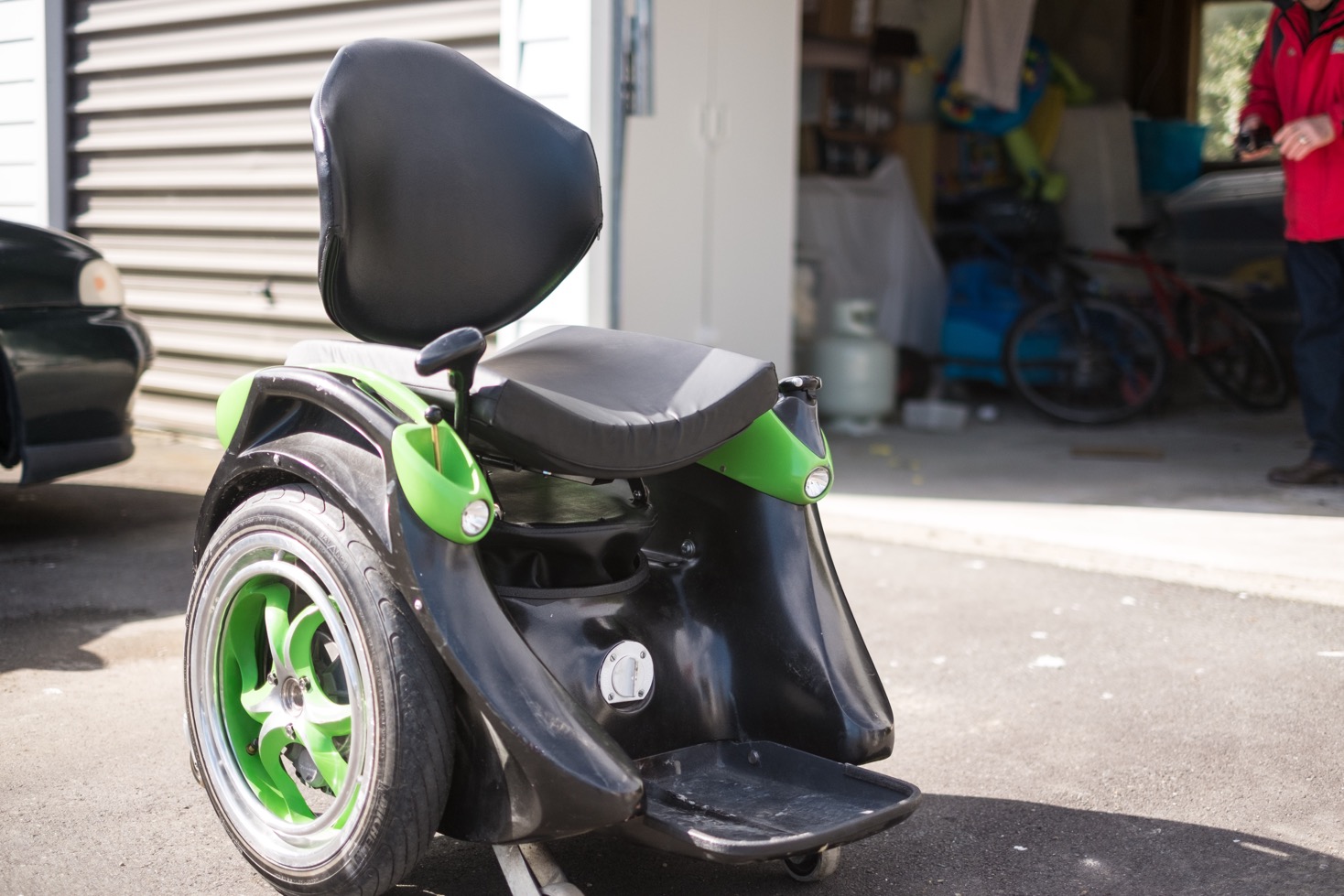 I tested for you: the Ogo, a wheelchair prototype made in New Zealand

Freshly arrived in New Zealand at the end of June, we bought our car from another French girl ending her working holiday visa. She gave us some advices regarding our year coming in this country. That is how we ended a month and a half later staying with Hugh and Celia at their home doing some helpX for two weeks. One evening as we were sharing a glass of wine and discussing, Hugh told us about a new wheelchair conceived by a New Zealander team and showed us a video. This wheelchair seems amazing. I never saw something like this. I am intrigued…

Two weeks later we are in Wellington. Kevin Halsall, the Ogo team leader, lives in only one hour from the capital. Let’s try to meet him! I reach out to him, explained to him what is my blog and its goal, and ask him if he would agree to meet me as I would like to test this new concept. He immediately accepted. A meeting is settled.

So here I am at Kevin’s place with all the Ogo team. I met Kevin’s wife Key, their daughter Erina, Norman and Marcus. Kay and Erina deal with the administrative part of the project and also with the social medias support. Norman is cameraman and producer so he takes care of advertising the Ogo trough videos. Marcus is a teacher, the Ogo beta-tester and above all Kevin’s friend. Indeed, the Ogo was created because of this friendship. Kevin and Marcus met many years ago and discover they have a mutual passion for archery. Sometimes they need to go in forest to practice this activity but, as you can imagine, it is a pain for a wheelchair user. Usual wheelchairs don’t allow users to move easily on uneven surface. So rolling on rocks and roots in forest is very complicated.

Kevin is a self-employed person. His job is to conceive new objects using plastic most of the time. He started to think about Marcus problem and one day he suddenly got it when he was trying a Segway. He had to use this technology to build a new wheelchair which could be used without controlling it by hands, just using a gyroscopic stabilisation system! That is a long term project. During 6 years Marcus and Kevin work on it almost every week-end. Bit by bit the project got more specific and many ameliorations are included in Ogo. After 5 prototypes they decided to start a crowdfunding campaign in order to fund the creation of a 6th prototype, which could handle a broad range of handicap. The goal is to reach an industrial production. Unfortunately the campaign didn’t succeed to raise enough money to achieve this goal but it caught on Australian television’s attention. Since Kevin received a lot of requests from everywhere. The project was getting so much bigger, that since the beginning of 2016 Ogo became his main project and that he works on it everyday. The team grew and Victoria University researchers are now part of it. 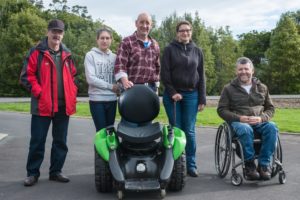 From left to right: Norman, Erina, Kevin, I and Marcus.

So that is at this stage of the Ogo project that I met the team. I had the chance to test the 6th prototype. After 5 minutes of explanations I was wandering alone sitting on it. No need to use my hands to make it going forward. Indeed the big innovation with the Ogo is that the user controls it with his hips. No need to do big body moves. The user just need to lean in front of to move forward and to lean a bit back to move back. Moving on sides is the same : we just need to lean on the right to go right or on the left to go left. The feeling is so smooth! A lot more than with a “traditional” wheelchair. For those who prefer it is possible to control directions with a joystick.

The more the person lean the more the Ogo goes fast. It can roll to 20km/h and face a very steep street easily.  Even the steep ones that I look at with fear in New Zealand before turning back! Abrupt descents less scary also as the seat stay horizontal. This way the fear we have in a “traditional” wheelchair because our body is leaning with the wheelchair just disappear.

One more thing to say about the Ogo. On the video you can see me holding on to it with my hands on the sides. Kevin was more confident this way as it was the first I used it but once you get it you don’t need to hold on it with your hands. Like this a person who has had his arms amputated who also need a wheelchair to move would be able to do alone without anybody help. It gives back a lot of freedom to wheelchair users as it is possible to move and at the same time to carry a thing. For exemple it is possible to stroll and at the same time to have a child on knees without being afraid. Motions are more natural so that makes discussions easier because the person on the wheelchair can turn to every people around without losing time moving the wheelchair.

Well, you got it: I really liked it! It also has some style with this two wheels. Because of them it is possible to go through uneven grounds: from concrete to gravel and even grass. There is also a second pair of off-road wheels to be able to roll on forest ground or sand without any issue. For someone like me who was born near the sea and love to go and see it that is a main benefit!

Still there are some disadvantages: the Ogo can’t be fold and is heavier than a manual wheelchair so it is way more difficult to transport. Consequently I think that it is not an equivalent to a wheelchair. This is an additional object which we allow you to do more but you will still need a regular wheelchair.

So what price for it? For now there is no clear answer. Kevin told me that they were trying to keep the price as low as possible. The goal is for most people to be able to have it, to enjoy an easier daily life. At the time I met him Kevin thought that NZ$20000 would be a fair price. However he expressed his doubts about that not being possible…