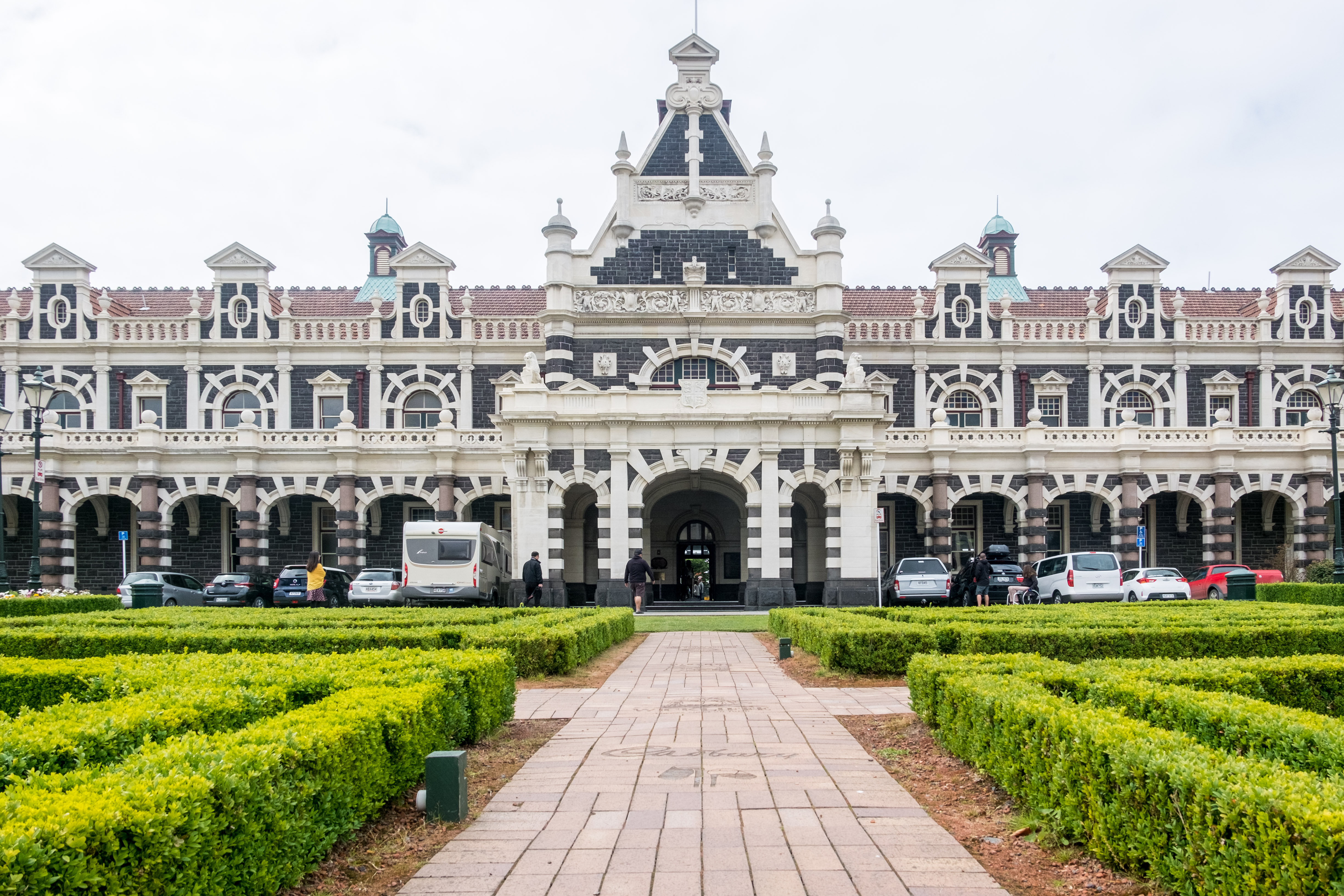 Discovering Dunedin and meeting Oamaru penguins in a wheelchair

By
Aurélie
on
As many people travelling in the south island we planned to visit Dunedin and to stop in Oamaru to see penguins. After being totally amazed by Milford Sound stunning fjords on the first day of the year we headed to the east coast.

With 120 000 inhabitants Dunedin is the 7th New Zealander city in size and the 2nd in the south island. This city has two specificities: students are an important part of the population and the city maintains a special relationship with Scottish culture because Scots built the city in 1848. In fact the name Dunedin means Edinburgh in Scottish Gaelic and apparently it is not rare to hear bagpipes and to see men in kilts during civil occasions. Unfortunately we hadn’t this chance because we visited on the first of January. Everybody must have been lazing around at home.
Still, let’s go for a good day walking in Dunedin streets. The program includes a stroll in the city-centre to discover the railway station and the chocolate factory and after that we will go to see the surprising “Baldwin Street”.
First assessment after half an hour walking: it is easy to circulate with a wheelchair in Dunedin. The city-centre is not flat everywhere but slopes are quite gentle so it is still possible for a wheelchair user to move around. Going up and down sidewalks is easy as there are lowerings. There are also wheelchair accessible restrooms in “Municipal Lane” street. 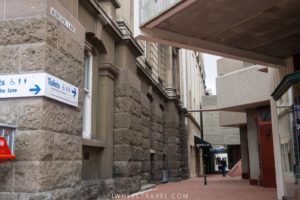 “Municipal Lane” is a pedestrian street.

Dunedin railway station is known to be one of the most beautiful building of the city so we didn’t waste time before going to see it. It is true that, with its all black and white architecture in a Renaissance Revival style, this construction built between 1903 and 1906 doesn’t have to be ashamed comparing to European railway stations. Black parts are made of volcanic rocks and white parts are limestone. This two colours gives the building its originality. The inside is quite beautiful too and there is an elevator to go upstairs. There is a wheelchair ramp to get in the building and also a parking for disabled people near the entrance. 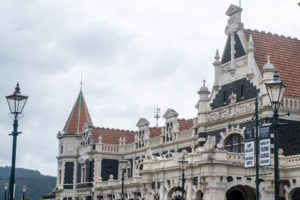 Dunedin railway station is one of the most photographed building in New Zealand.

Now that we visited the railway station it is already mid-day and we start to feel hungry. So let’s head to Cadbury chocolate factory! Like we have a sweet tooth, we went directly to the essential: buying chocolate! We did not visit the factory. Anyway there are no tickets available anymore for today’s visits. Chocolate are not really cheaper than in supermarkets but we can choose between all the different chocolates boxes and even others sweets. It is also the perfect occasion to make Baptiste, our friend who came in New Zealand for holidays, discover the “chocolate fishes” and “Jaffas”, those chocolate spheres covered in orange flavour coating. These are two New Zealand’s classics. We also taste a chocolate soda but it would have been a better idea to avoid that. It tastes more like a medicines than like chocolate! 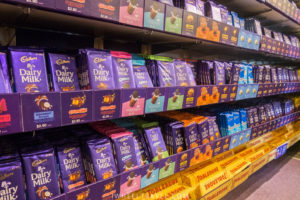 Speaking of local tasty discoveries: if you like beer you can go at “Stuart Street Mac’s Brew Bar” for a drink. There you can taste all the New Zealander brand “Mac’s” beers. Atmosphere is cool. Sometimes there are lives and decoration gives character to the establishment. A lot of lampshades are hanged from the ceiling and many old televisions are hooked up to walls. There is no stairs to enter the bar so we can access it easily with a wheelchair. 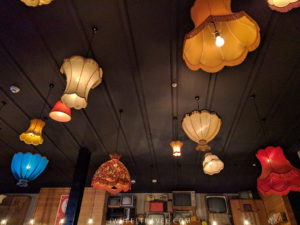 The bar is located corner Stuart Street and Octagon.

One of the others most famous places to visit in Dunedin is Baldwin Street. But why? According to the Guinness Book of Records is the world’s steepest residential street. It has a gradient of 19°. 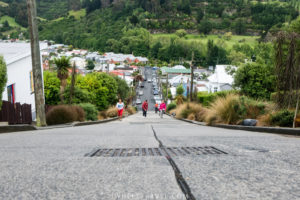 From the top of the street.

Obviously I stayed at the bottom of it waiting for the guys as they went for a walk to the top and had some fun taking pictures. Every year is this street a very amusing event takes place: the Jaffa Race. 30 000 Jaffas are poured from the top of the street and people grab them at the bottom. 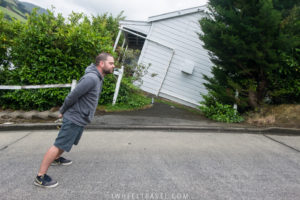 Outside the city “Otago Peninsula” is a lovely area to visit. It is not impressive but it mades me think of Brittany. There are a lot of seagulls and some wooden shacks all along the bay. At the very end of the peninsula there is a wheelchair accessible boardwalk from where it is possible to access the edge of the cliff. There are a extraordinary number of birds there! 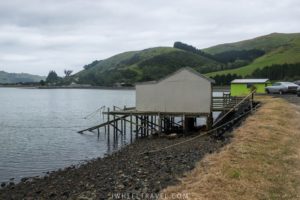 Along the peninsula bay.

Night is coming. It is time to go to Oamaru where blue penguins will come back from their day journey into the ocean to go in their nests. It is the perfect time to see them. Some years ago it was possible to go by ourselves to the place where they nest. Unfortunately today this is not possible anymore. To be able to see these animals in Oamaru we have to pay for a visit and sit in an amphitheatre with a lot of others people. When we arrived I though that touristic exploitation of the site is going to far. As soon as we enter in that place there is a shop and it is also possible to buy “deluxe” tickets to have a better view. Honestly I think that we almost had as good sit where we were in the “normal” seats. I think that Deluxe tickets are too expensive compare to what they offer. The difference is negligible. Visiting the penguins colony is possible for a wheelchair user. It is easy to access the amphitheatre but a wheelchair user will need to stay at the bottom of it.
Once we sat the woman in charge of the colony explain to us what is the work of the colony team apart from allowing tourists to observe blue penguins. Since the 1970’s the team studies the penguins behaviour and their reproduction. Wooden boxes were made to be used as nests as they are supposed to be less fragile. There is less risks they will collapse on the penguins and eggs. The purpose is to help the reproduction of the specie. Also in order to protect those little blue penguins taking pictures and films is forbidden. 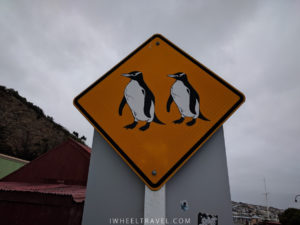 Be careful of penguins!

Also called Korora in maori language, these animals are the smallest penguins in the world. They mesures about 30 centimetres and weight about 1 kilogram. They live 8 to 10 years on the New Zealander and Australian coasts. Everyday they leave at sunrise to go fishing in sea and they return at sunset. It is at this time that we can see them. Despite the too touristic side of the activity I must confess that I very liked to observe them coming back to nests. They are so little! They are also unintentionally funny! Once they reached the beach they try to go fast to the nests climbing a rocky slope but as they are a bit clumsy it is not rare to see some of them falling in the ground head first! They are less agile that their dancers cousins in Mary Poppins!
A lot of people left before all the penguins came back as we are outside and it is night. Animals feel a bit less afraid as we are just a few now and the staff is also more relax. Consequently, even if we stay on the other side of fences, we can be closer to the penguins as they come near to us. Two of them were at only one or two metres away from us! That is a very good memory even if one day I would like to be able to see penguins aside from a touristic show.