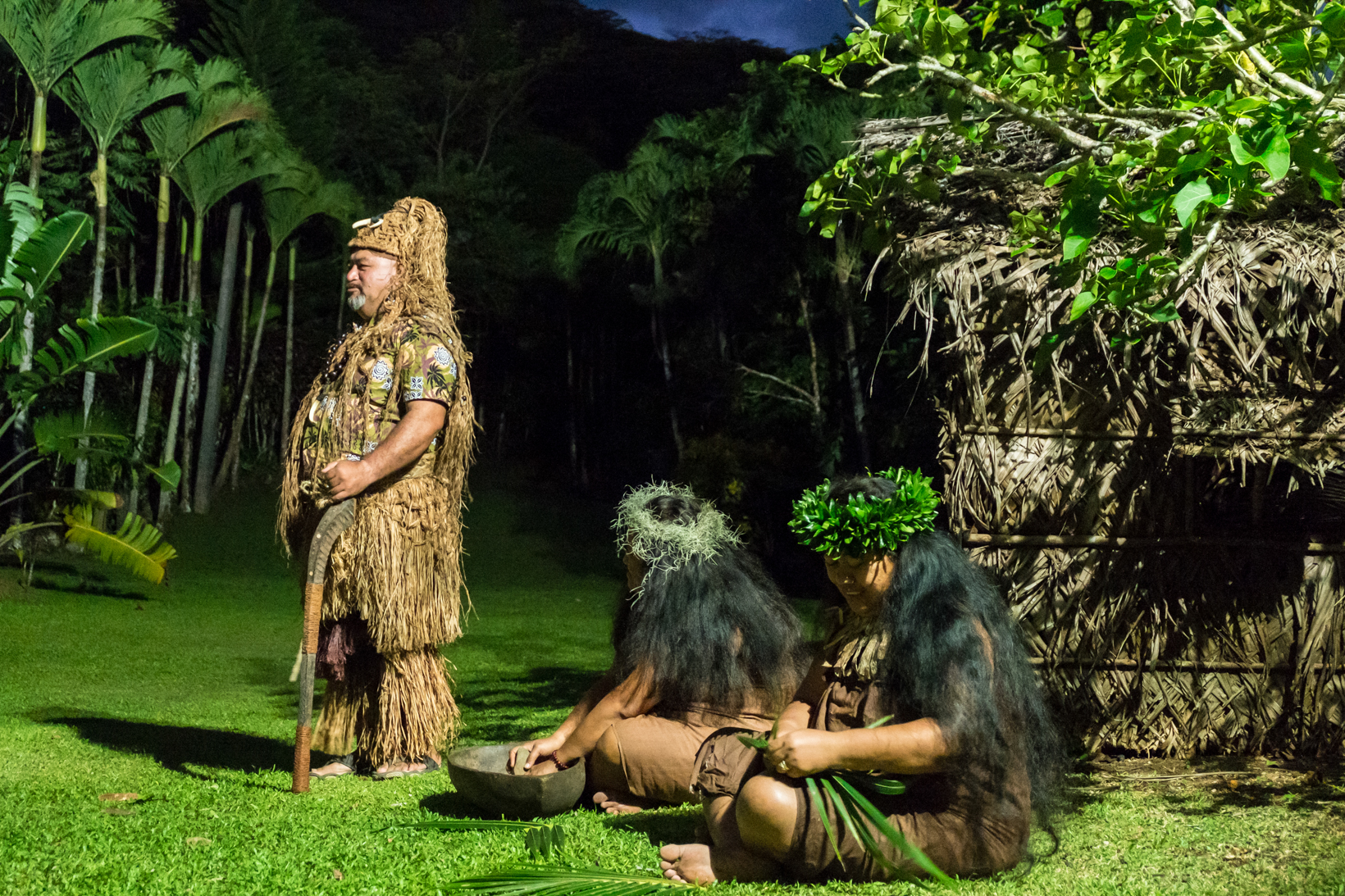 Rarotonga: a travel into the islands culture

A Polynesian culture with a touch of New Zealand

Even if Rarotonga is the biggest of the Cook islands, it is just 11 kilometres long. The main road which goes all around the island is 37 kilometres so even if we drive in the wrong direction this is not too bad! That will be a good opportunity to glimpse some locals, sitting on scooters without helmets or in cars without seat belt! In the Cook islands, road safety seems not to be such a big thing! It is usual to see children sitting between the front seats without seatbelt on or even in the back of a pick-up car. Once I even saw a young girl sleeping against her mum’s back who was driving a scooter… and none of them were wearing a helmet of course! That is completely unimaginable for us! 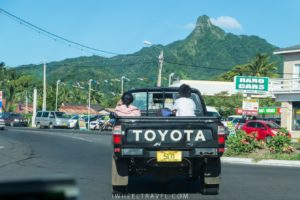 Indeed life on an island in the middle of the ocean is very different compared to our continental lives, even on island countries as United Kingdom or New Zealand. In the Cook islands people take their time, listen to Polynesian music at home or at work and don’t want as many materials things. Even when we walked just near ministry’s departments we heard those relaxing rhythms! We can see a lot of smiles on theirs faces, flowers in women hairs and we hear young women singing. Here people don’t hesitate to honk, to hail a buddy to say hello from the other side of the road or to embrace each others when they come face to face with a friend. Good mood is everywhere and that’s made me feel great! Despite those distinctive characteristic there are a lot of similarities with New Zealand, as they only became independent from it since 1965.  In both countries we pay in New Zealand dollars, speak English and Maori, sail on wakas and play rugby! 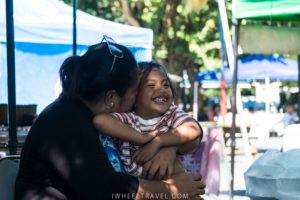 At the Saturday morning market .

I started this post talking about the cook islanders way to drive but I am sure that when you read “Polynesian culture” you were thinking of those pretty women dancers. So to see some of them, we went to an island night at “Highland Paradise”. For NZ$99 an island night includes shuttles, a tour in the “village”, a feast and a stage show. Shuttles are not wheelchair accessibles as they are regular small buses. Visiting the “village” is possible but it is not easy due to grass, gravels and uneven ground. Inside the building where the show and dinner take place there is no problem at all.

I found the “village” visit disappointing  especially compare to what we saw in maori village in New Zealand. Here it is a small walk outside during which we learn a bit about Cook islands tribes culture like how are the fruits trees leaves used as a cure and how did their ancestors discovered New Zealand. The most interesting things was to discover that the Cook islands Maraes are different from the New Zealand ones. In both culture they are a sacred and religious meeting place but in New Zealand they are kind of big wooden houses with carves whereas in Rarotonga they are big trees with a space around. Only the most important people of the tribe as the chief and the best warriors can enter in. No women are allowed except the matriarch. 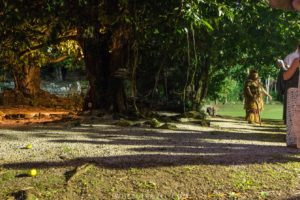 The dinner was average. There was a lot to eat but unfortunately I found that ingredients were not exceptionally tatsy. There are so many things on one plate that it is very difficult to distinguish flavours and no explanations were given.

On the contrary the show was very good. Songs, dances and drums: everything is very well performed! Woman dancers are so graceful and so pretty in theses clothes that it looks so natural and easy to dance this way but it must be tiring. Every dance depict a part of the Cook island history or an important event of life. So through theses dances we discover wars between tribes, the sailing to New Zealand and weddings traditions.

The life in the islands seems to involve specific difficulties. For instance the garbages management and the proliferation of some kind of animals are real problems. Indeed we were surprised to see as much rubbish along roads and even near some beaches. It is not rare to see garbage bags hung on trees and empty beer bottles on the ground. Unfortunately that seems to be done mostly  by locals. I am aware that rubbishes elimination on an small island probably needs a specific logistics but it seems to me like people don’t really care about that. For example there are almost none public garbage bins and there are a lot of cars carcasses in gardens. 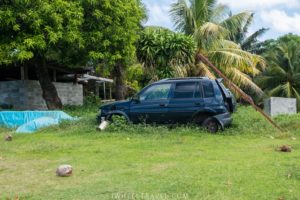 One of the too manny abandoned cars that we saw.

Wild dogs proliferation is also an issue. We crossed them everywhere. Some follow people walking during hundred metres and many of them cross road in front of cars. Some of them are badly injured, most likely they often fight. However things are getting better. A few years ago there was way many more, as much as three to four times. Indeed inhabitants had a lot of dogs but they were not taking care of them and let them free. So a new law was passed. Now people owning a dog must registrer it and as they have to pay fees to do. So they own less dogs! Government is now looking for a solution regarding chickens and roosters overpopulation. There are so many of them which is a real issues as they are used to yell at 3am or 4am!

In Rarotonga human relationships are warm and generous… So is the food! Indeed in Rarotonga people eat a lot! Unfortunately, as in many of the pacific islands, we can clearly see it . According to the World Health Organisation, the top-ten countries with the highest rate of obese people are pacific islands. The Cook islands seems to be the country with the more obese people in the world with more than 50% of the population being obese (and over 80% overweight). This is due somewhat to globalisation which reached these islands during the last decades. Cook islanders had access to all those new products they were not use to eat, therefore eating less their local food and bought more manufactured and unhealthy products. This is such a shame especially as they have very good local food. Fruits are delicious! Bananas and pawpaws don’t taste the same at all. And for those who, like me, love fish you will not be disappointed!

There are two regular markets in Rarotonga. Muri night market is every Tuesday, Wednesday, Thursday and Sunday from 5pm to 9pm. At this market there are many food stalls with local and non-local food: fruits, fish curries, raw fish meal, squids, tacos chicken cajun, smoothies, cheesecakes… All of that in a 70’s/80’s atmosphere with synthesizer sounds and plastic chairs! If you would like to do a good deed for the environment you should rent a plate and cutlery for NZ$2 to those children of the school charity. This way you also help Cook islands schools. 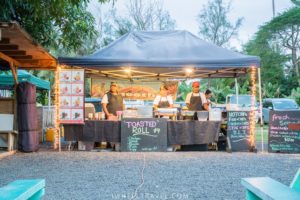 The other market, the most important of the week, is Punanga Nui Market. It is every Saturday morning in Avarua from 7am. There you’ll find fruits, vegetables, takeaway food and also a lots of souvenirs made in Rarotonga or in Asia! While you are strolling between those many stalls you can sip coconut water (called “nu”) directly in a coconut. Unless you prefer to wait and buy one to a Cook islander along the main road! 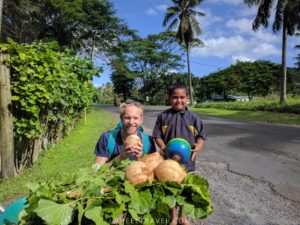 Franck holding our first coconut with the boy we bought it from.

Is there a better way to discover a local cuisine than being invited to one family’s table? That is what the “Progressive dinner” is all about. Started ten years ago, this experience lets you share a three-courses meal (starter, main and dessert) in three different households. When we heard about it, we quickly signed up for it, even if it is a bit pricey at NZ$ 90 per person. The food was delicious! Well done and generous. I specially enjoyed their local take on raw fish : Ika Mata. It is a recipe based on raw fish marinated in lemon juice and fresh coconut milk. I liked it so much, I had it twice after that at the market! We also discovered arrowroot and a taro leaves sauce called Rukau. Plus, we got to taste many local fruits. As for desserts, there were not as surprising : crumble, ice cream, sponge cakes and the famous New Zealand Pavlova. 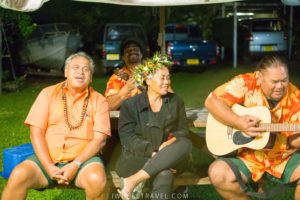 Some local music to lighten up the dinner!

A deep sense of religion

The Progressive Dinner was also a good opportunity to learn more about Rarotonga culture, especially about the importance of religion in daily lives. We did notice this when we started going around the island : there are churches everywhere! We spotted  many along the road for such a small place. Theses churches are some of the most beautiful building on the island. 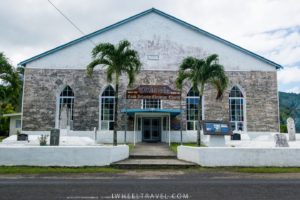 One of the many churches.

There are cemetery outside of theses, but you’ll find many graves around houses too. Those born in Rarotonga decide where they want to be buried: at the cemetery or on their family land. Usually they will choose to stay on their property, surrounded by close ones. In some other culture, having a view on your parents’ graves from your living room window might be rather strange or sad, but not here. The grave will be treated with respect, but it is also a place children are expected to gather, sit on, play and laugh. It is all about being close to your loved ones long time after they are gone. 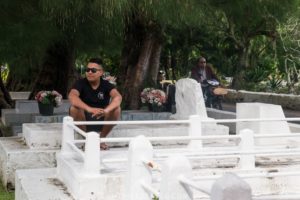 Out of the mass, just chilling.

In a broader perpective, while religion is taken seriously, there is much joy into it. This is clearly visible during mass. On Sunday morning, we went to “Cook Island Christian Church” in Avarua to find out more about it. We heard going there was something not to miss and we were not disappointed. What a lively celebration! The church was full of women, men and children all well dress-up. Women were wearing fine jewellery, hats and flowers in their hairs while men were in suits or in their best flowers-printed shirt. Adults in the choir were all in white, and kids were in uniform. Boys with hats, girls with hair all well-braided. 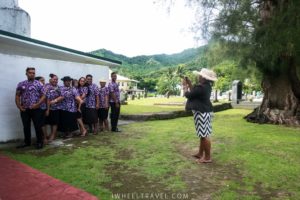 Family photo shooting after the service.

Most of the service was in Maori, but it didn’t stop us for enjoying it. We were astonished by the songs. Loud and cheerful! Almost all of the singing were done a capella by the choir, then most of the people joined in. Those gospels, sung with such power and energy, made my skin crawl!