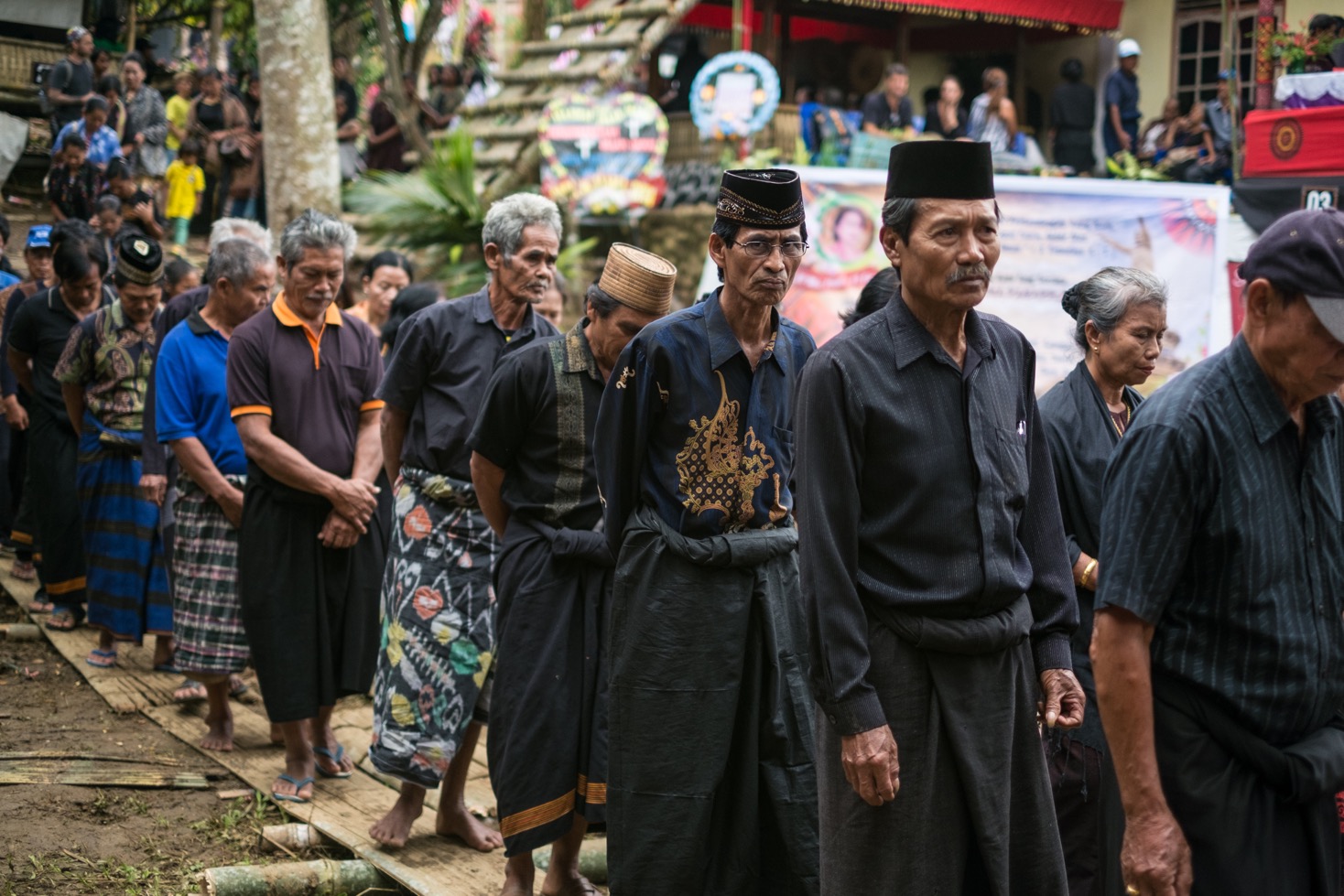 Toraja people, mainly Christians, keep only a few of their old rituals from their animist time. Of all the ceremonies they use to do, only funerals are still being done like their ancestors’. While we were in Rantepao, we had the opportunity to attend to one of these. Believe me, it will move you, one way or another. Few weeks have past since, but I still keep vibrant memories of it. But before jumping into it, let me tell you a little more about death in Toraja lifestyle.

Death is a part of their life, so to speak. It is not taboo, quite the contrary. They keep interacting with the deceased, long after he or she passed away. Dead people are part of the daily life. So much that the body usually rest in the house for months, and so until the day of the funeral. Indeed the funeral ceremony, called “tomate”, can occur several months or even years after the actual death. Those ceremonies can cost up to thousands of Euros, lasting several days to an entire week, and gathering hundreds of people. Therefore it takes time to save enough money and to plan such a big event.

In the meantime, the body is embalmed and look likes a mummy. During this period, from the passing to the funeral, the deceased is considered not dead, but sick. The family still talk to them and even brings food several times a day. It is their way of caring for the deceased, and showing him or she respect.

So here we are Franck and I, at the “tomate”, three months after the passing of a lady. You might ask yourself: “Isn’t it a bit bizarre to attend a funeral as a tourist? On the top of this, of someone you didn’t know?”. I admit that we did ask ourselves the same question. I have a hard time picturing tourists at the back of the church during the funerals of my close ones, taking pictures… But here, in Tana Toraja, it is completely normal. Actually, the family is quite happy to welcome tourists. The more the better. The deceased’s daughter came and thanked me in person to be here, and stayed few minutes next to me to discuss. 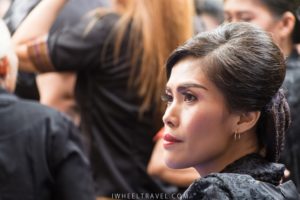 The daughter of the deceased.

When we arrived the place was relatively empty and we were the only tourists. We did arrive early and it was the first day of the funeral. But one hour later, it was filled with people and we were surprised to see so many tourists. As many as locals. But you can tell this is quite usual : between the priest sermons, the main speaker thanks tourists to have come, and so in different languages (English, French, Italian…). 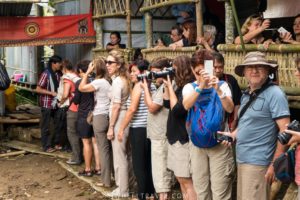 We took this opportunity to see how the ceremony area was set up. It took them only three days to build temporary “houses” out of bamboos to host the guests (this include tourists). Those shelters are basic but pretty nonetheless, as they wrapped them in red coloured cloths. We are a bit surprised to see advertising for cigarettes posted around on banners… Although it is a bit less unusual when you know that ads for cigarettes are everywhere in Indonesia with slogans such as “Pro never quit”… 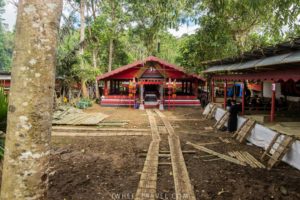 The main temporary house where the deceased’s close ones go and sit many times during the ceremony.

Just behind us women are preparing some plates with the different presents that were given to the family (cigarettes, figs, sugar…). Meanwhile, the priest is doing his sermon. We also notice the presence of a gouvernement official. According to our guide, that person is here to collect taxes on animals (pigs and buffalos) and to make sure everything is done lawfully. Few metres from here, there is also a film crew for the ceremony. Maybe it is national television ? 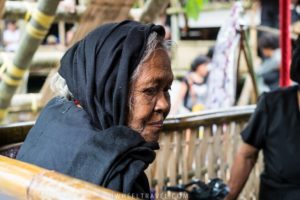 Lost in thought while preparing the offerings.

When the priest sermon is over, the family of the deceased offered us tea and snacks like deppa torri, banana cake and banana fritters. Later on we have even been offered the traditional Toraja dish: pa’piong. It is a pork dish, cooked in bamboo. All morning long we saw pigs, all tied up, being brought to the kitchen to be eviscerate, then being torched with a flame thrower before being slowly cooked. 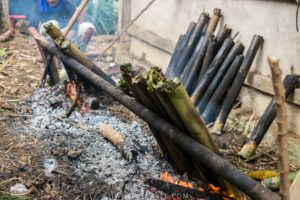 Now the ceremony is really about to begin. We see people going to the main shelters and back several times. Men are dressed in black. Many of them wear traditional hats and sarongs to cover their legs. For women, it seems there are two kinds of outfits. Some of them are wearing traditional black dress, with red and orange embroideries: they are the close family members. Others are wearing long black skirts with bright orange tops: they knew the deceased, but were not close. Usually cousins or neighbours, they are here to make sure the guests always have food and drinks. The younger girls are magnificent, with their stunning red or black outfit decorated with jewels. Finally, other guests that do not have special clothes are people who didn’t know the deceased. 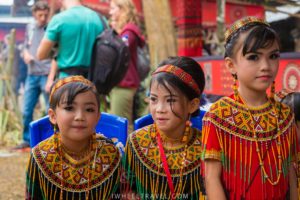 Aren’t they so cute?

In the mid-morning, a buffalo is brought and attached in the center of the area. The tourists fell silent. Everyone understood what was about to happen: the buffalo is about to be slaughtered. A tourist couple is covering their child eyes. This makes some of the local people smile: children here are watching the scene and are not shocked at all.

As for me I was dreading this. But surprisingly, it was not as hard to watch as I thought it would be. I was facing the buffalo’s back so maybe that helped. Everything went really fast. A man gave one quick machete swing to the buffalo’s throat and the animal collapsed on the ground. Although it was dead, the corpse had tremors from time to time. This, plus the blood which was still flowing made me shiver. A little bit like being cold, but this feeling quickly faded. 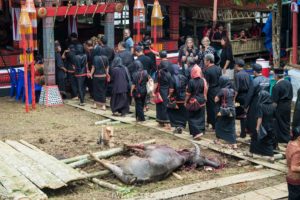 A procession started right at after the sacrifice.

Now the beast is laying motionless on the ground. Some men arrive, unroll bamboos mats near the animal and start to skin it. It will be dried out and exported to be sold. Then they remove the bowels, the limbs are cut off and the meat is cut into pieces. In less than an hour there is nothing left of the buffalo except its head, which they left there in the open, in plain sight. The meat will be shared among the family of the deceased, the guests and the villagers.

This tradition might be considered barbaric to westerners, but at least it raises some thoughts about how Humans treat animals. Whether like them for a ritual sacrifice, or like us, raised intensively and crammed for our consumption. Here Toraja people believe slaughtering buffalos will help the dead’s soul to reach the heaven. And since heaven is a long way from Tana Toraja, the more buffalos the better. So in the end buffalos are sacred here and Toraja people take great care of them. 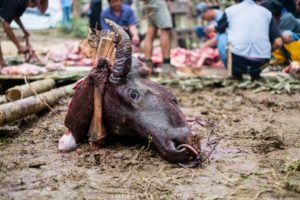 After all this, our guide leads us to the kitchen, to show us “backstage”. Here, there are only women. Men don’t cook. They helped beforehand, setting up the shelters. These women barely speak English so communicating with them was not easy, but they seemed quite happy to meet us and were proud to teach us some words in Toraja language. 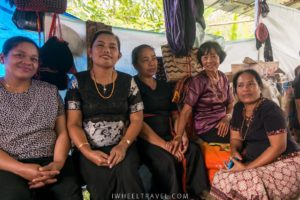 This lady dressed in purple looks so kind!

The funeral ceremonies are held in people houses. Therefore accessibility will be different each time. Access to the funeral I have been to was not easy. There was a concret slope to go from the car to the house but things get tough after that. The ground was muddy and the “paths” to walk on were made off bamboos. Plus, it was squat toilets.

Anyway, it is time for us to leave the funeral ceremony. Our guide decided to bring us to a wedding where he is vaguely acquainted with the family. No buffalo slaughtering here, but we still eat Pa’piong. The feeling is more merrier and we can see some men a bit tipsy. Well the local alcool, palm wine, is flowing freely.

Unlike the funeral ceremony, there is no temporary house built. Guest are sat under tongkonans or under wedding tents. The traditional outfits are almost identical, except white rather than black. The groom and bride outfit are stunning, embroidered and covered in jewelries. 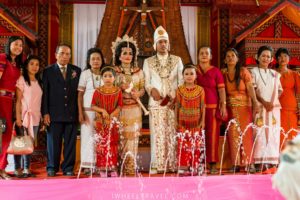 Husband and wife stayed all the afternoon there taking photos with their guests.

We discretely get closer to the stage to admire their outfits, but our presence didn’t go unnoticed. Then came a flooding of selfies. Many guests were happy to see us and wanted to take a picture with us. This was quite funny: for more than fifteen minutes we were surrounded by young (and less young) people. Some of them were puzzled by Franck’s hair colour. So they had to come and touch it, just to make sure Franck’s hair were real. 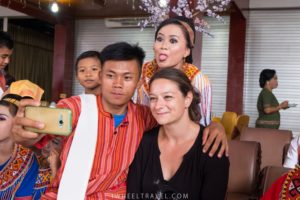 On this joyful note our week in Tana Toraja is coming to an end, our head full of many new things we have learned. I loved to find out more about this so different and fascinating culture. This stop will definitively be one of my favorites in our South-East Asia journey, one that we will remember for a long time!

If you want more information about travelling in Sulawesi you can read about our week in Tana Toraja and also about Makassar.

How much does it cost to travel in Indonesia?

Borobudur, Prambanan and Merapi : Java’s temples and volcanoes in a wheelchair