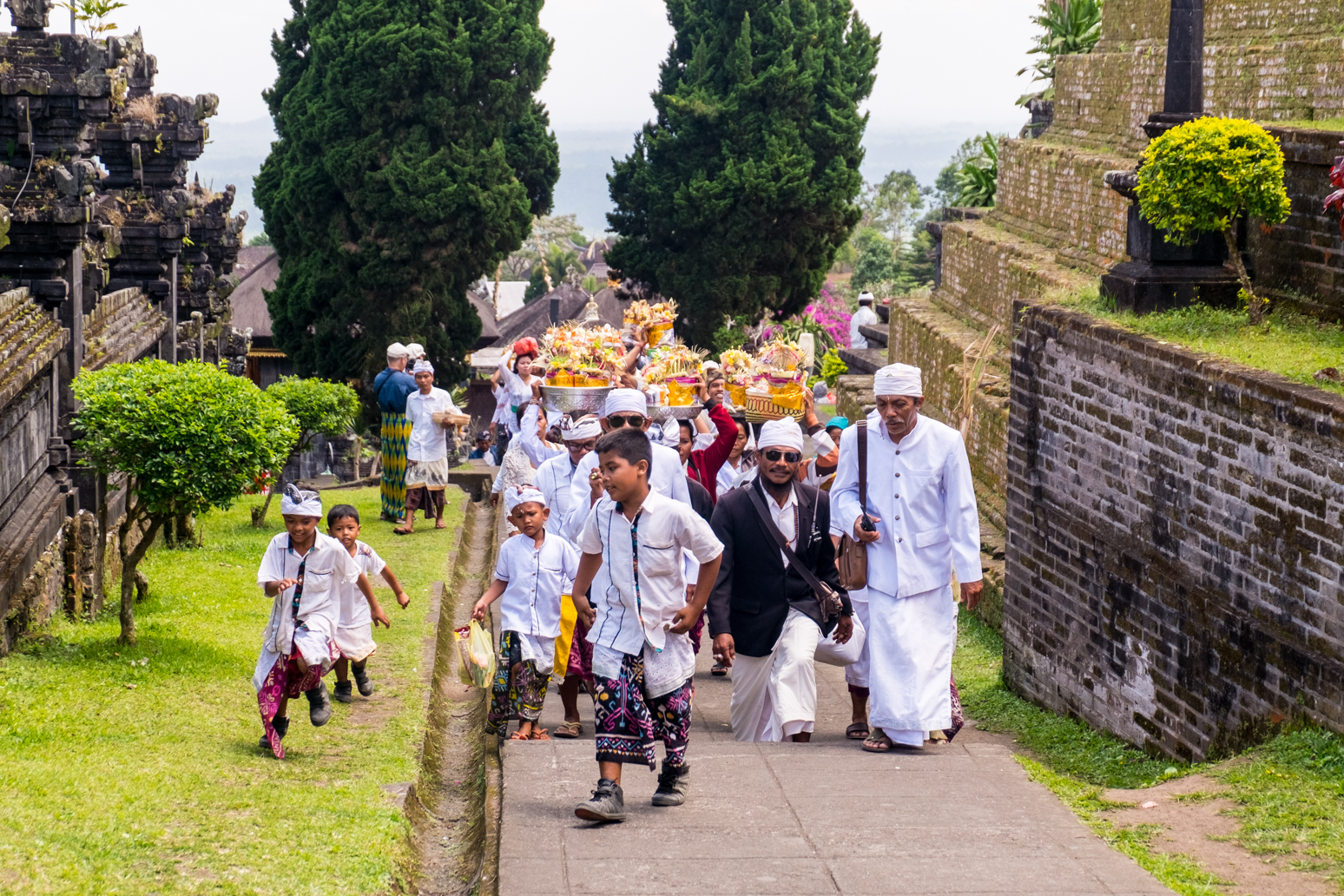 Discovering Bali’s wonders in a wheelchair

Bali is one of the most famous asian destinations. It attracts so many tourists every year. Much more than the rest of Indonesia. So much more that a lot of people don’t even know that this island is not a country and is actually a part of Indonesia. After our disillusions during our stay in the Gili islands, I must admit that we were a bit afraid to face again mass tourism. Fortunately that was not the case. It is true that many people go on vacation in Bali and that this is a busy destination but still, we really enjoyed our time there discovering this island treasures. Hindu temples, royal palaces, majestic volcanoes and paddy fields: every day we were amazed by many balinese beauties. 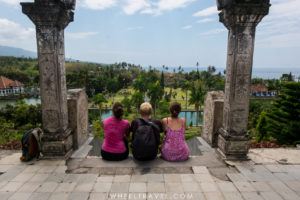 Ujung Water Palace, with Franck and my sister Alicia.

Visiting Bali’s temples in a wheelchair

When we arrived in Bali, after many weeks travelling in Malaysia and discovering muslim culture, we immediately dived into a new way of life. Hinduism is everywhere in Bali. In daily life and also in the buildings and in the nature. And of course, the most obvious expression of this religion are the many Hindu temples we can find everywhere. So after we had visited two famous temple in the south of the island, we headed north-east to discover other temples not so far from Ubud.

After the monkeys temple, we are now in the bats temple. In fact, Goa Lawah means “the bats cave”. Indeed it was built on a cave sheltering hundreds of bats. 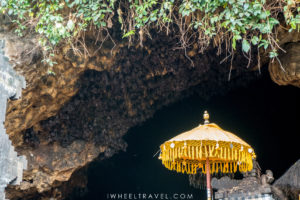 A lot of bats at the entrance of Goa Lawah cave.

There are many stories about this place. According to some legends there is a underground river in this cave and a giant snake. It also seems that a tunnel used to connect Goa Lawah temple to Besakih temple years ago, which would have collapsed due to an earthquake. So what do you think? True or false? Well, we didn’t go in the cave to check but I can tell for sure that there is at least one very big snake around there! 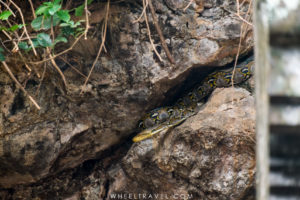 A snake in Goa Lawah temple. 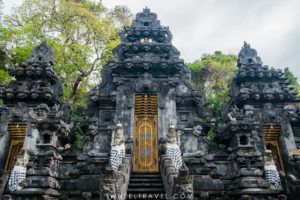 Besakih is not only one temple. This is a facility gathering 23 temples together. Consequently, this is the biggest temple of Bali and most important temple for a lot of Balinese people. They call it the mother temple. But of this 23 temples only the main one “Pura Penataran Agung” can be visited. The others are private and only the families can access them. 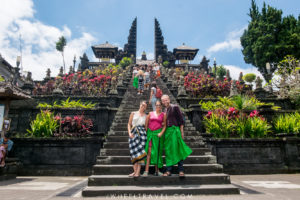 At the bottom of Besakih temple in Bali, with Franck and my sister.

Built on a hill, the facility is impressive. Temples seem to have been built to try to reach the clouds. The temple gates, framing the huge stairs, highlight the importance and the prestige of this place. Plus, from the summit, the view on mount Agung is supposed to be breathtaking!

Because of the many stairs leading to the summit, I haven’t been able to reach it but my disappointment quickly disappeared when I saw a procession. Many Indonesians, all dressed in white clothes and carrying offerings, were headed to the top of the hill. Some people seemed to be sad or at least thoughtful while others were smiling while looking at the kids running around. According to our guide, it was a funeral procession. 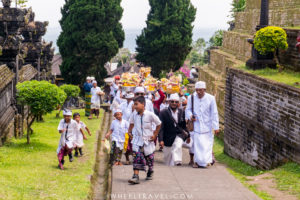 This temple is very touristic and apparently many visitors are scammed around its premises. For example, many “guides” ask for abusive fees and tell that they will bring you to a private temple whereas they are not allowed. When we visited Besakih temple we hired a driver for the day and everything went well. He took us to different tourist sites we chose together and then came with us in those places. He told us a lot about the temples and others places we visited. We learnt about Hinduism and Balinese culture. So I would recommend you to hire a driver to avoid some inconveniences. 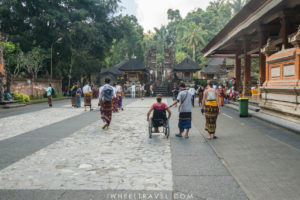 With our guide in Bali.

Besakih temple is not wheelchair accessible neither. It is possible to reach the bottom of the temple by car and  enjoy a very good view on the sacred place but unfortunately bond wheelchairs users will not be able to go further. From this point there are a lot of stairs everywhere. Indeed this is the least wheelchair friendly temple I have been to in Bali.

Tirta Empul temple is popular for its holy water pool. According to balinese beliefs, the water has magical and healing powers. Many Balinese people come here to accomplish a purification ritual and many tourists enjoy to take part in it. All of them go in the holy water pool, give an offering to the gods and then get soaked under every fountain of the pool. Well, except two of them which are used only for dead purification rituals. 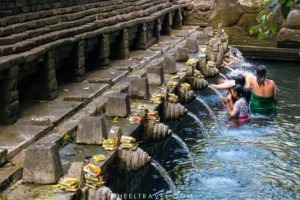 I absolutely enjoyed discovering this temple and its ritual. It was one of my favorite moment in Bali. Even if the place is very touristic it still has a beautiful vibe. In this temple, traditions and religion coexist with curiosity and tourism. 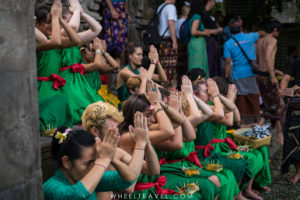 A few Balinese people surrounded by tourist during the purification ritual.

Just behind the holy water pool, there is a charming and quieter place which most people don’t take the time to discover. It is a shame as the place is lovely. There you can have a good time gazing at pagodas, Hindu temples and looking at the many carps in the pools. 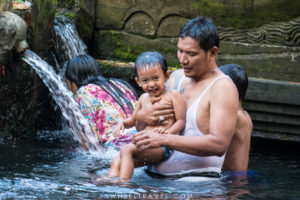 What a good surprise! Tirta Empul is almost fully wheelchair accessible! You can roll everywhere around except in the holy water basin and there is a small step (last photo in photos gallery) just before the “view point” on the holy water pool. There are steps to enter in the holy water pool. Plus it is very slippery. Ramps are a bit to steep but at least they exist!
When you enter the temple take the pathway on the right and then follow the path on the left. From there you can roll until you reach the side of the holy water pool from where you have a very good view on the purification ritual. 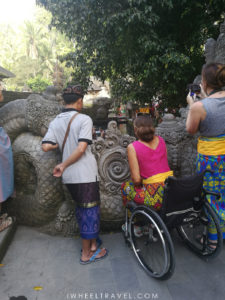 Besides the many Hindu temples, Bali is overflowing with astonishing landscapes and charming palaces as Tirta Gangga and Ujung Water Palace. But don’t except to visit splendid architectural features, those palaces are essentially about their lovely parks where we can stroll between many trees, flowers and pools. 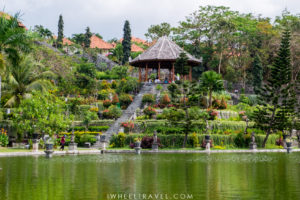 In Tirta Gangga I really enjoyed to wander around the pools, looking at water lilies and feeding fishes. I am pretty sure adults have as much fun as kids feeding them! I think Franck, my sister and I stayed at least half an hour just feeding them and watching other people doing the same. 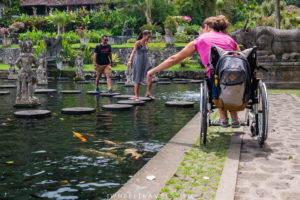 Many Balinese people come to Tirta Gangga on Sundays with their families to bath in the pools or, like us, to feed the fishes and stroll through the many Hindu divinities statues. 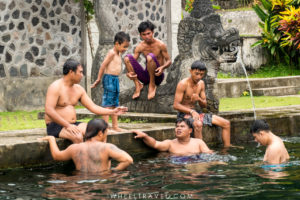 There is a wheelchair accessible entrance at the left of the main entrance. On the other side of the gate you face stairs but there is an accessible pathway on the left. Following this path you will reach an upper zone from where you can see the entire park. 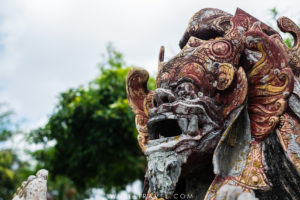 A divinity statue in Tirta Gangga.

Bali is located on the Ring of Fire where most of the earthquakes and volcanic eruptions in the world occur. So that’s not a surprise to see many volcanoes in Bali. Among them, mount Batur is one of the most famous because it reaches 2152 metres and, above all, its eruptions are really powerful and impressive. Unfortunately when it does erupt, it causes many damages and losses. Today, more than 20 years after the last eruption which last several months in 1999 and 2000, we can still clearly see the stains of the old lava flows when admiring the volcano from Kintamani village. 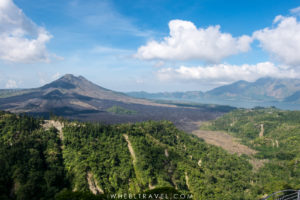 View on mount Batur from Kintamani.

Bali is not only about volcanoes, white sand beaches crowded with Australians surfers and Hindu temples… When you think of Bali you surely picture those marvellous paddy fields we can see in the travel agencies leaflets or even in Hollywood movies! The most famous one is surely Tegalalang, which has been feature in “Eat, Pray, Love” starring Julia Robert. 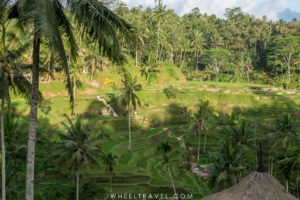 Tegalaland paddy field are charming and beautiful. That was the first time my sister saw one and I could see her eyes sparkling when she discovered this landscape so different from what we are used to see in Europe. This moment remembered my own magical one during my first walk in the middle of rice fields in Sulawesi. But this time I must admit that I didn’t feel the same despite the beauty of the place. Surely I missed the calm and the authenticity because of the many tourists around us and it is right by a traffic heavy road. Plus, I felt a bit frustrated not to be able to stroll through the middle of the paddy field as I have done in Sulawesi.

If you want more information about travelling in this country you can read about all our travel destinations in Indonesia and their wheelchair accessibility. We also share with you the detailed budget of our travel.